What’s a sports and politics nerd supposed to do with his thinkin’ time?

But before I get into my bracket, I’d love for you to play along and create brackets of your own. Here’s a link to the handy .pdf I used. Download you own, fill it out, and share it in the comments below. Even better, share it on the Take The Field Facebook page. 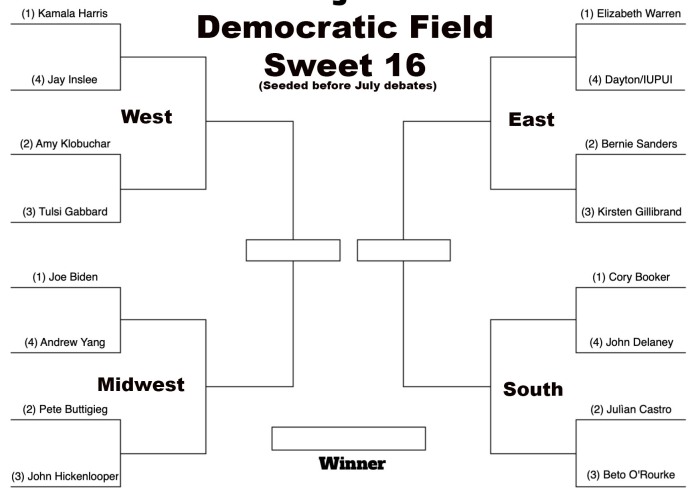 1. Top seeds earned their spots. As the No. 1 overall seed, Elizabeth Warren gets to stay close to home in the East Region. That pushes Joe Biden (a natural fit for an East bid) into the Midwest. Following her strong first-debate performance, California’s Kamala Harris draws a top-seed of her own, and is a natural fit for the West Region. Cory Booker surprises some as the fourth No. 1 seed, and heads up a strong South Region.

Also noteworthy, as the No. 1 overall seed, Warren’s second round matchup will come against the winner of the play-in game between the University of Dayton and IUPUI. (Right here is the spot where the nerdy sports joke works with only 62 percent of our readers. Right. Here.)

2. Dirty South, can y’all really feel it? (Yes, that is an Aaliyah/Timbaland reference. Bonus points if you heard the song in your head as soon as you read it.) 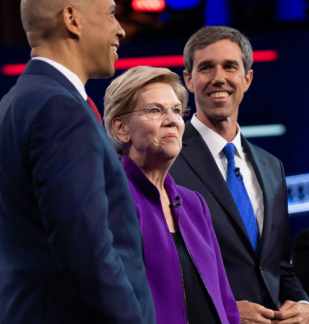 All four regions have excellent matchups throughout the tournament, but the South is the strongest of the bunch. A first-round tilt between Julìan Castro and Beto O’Rourke  could be a classic. And if Beto can stay out of foul trouble and get back to Beto-ball, he’s got a chance to pull the upset.

Beto-ball or no, he will need to be much sharper than he’s been of late. Not only is he fresh off his loss to Castro in their last meeting, but his costly non-conference losses against Indiana State, Valparaiso and UTEP undoubtedly cost him with the seeding committee.

3. Elite Eight matchup I most want to see: While the top-two seeds in each  region would make for incredible second-round drama, there’s no question that the Midwest Region takes the prize.

4. West side is the best side. It isn’t hard to see that the glass ceiling has been shattered, swept up, trash-canned, and forgotten in the West Bracket. Tulsi Gabbard, Amy Klobuchar and Harris dominate the region. What should be fun is seeing the way that Gabbard’s ruthless tempo and ferociousplay in the paint holds up against Klobuchar’s slower offense, which is predicated on back-cuts and mid-range jumpers.

5. Best chance for a first-round upset? Gimme Gabbard or Gillibrand, though both have their work cut out for them.

Oh, and while you’re filling out your brackets, subscribe to the Take The Field Podcast here. Or listen below.

View all posts by Kyle Belanger